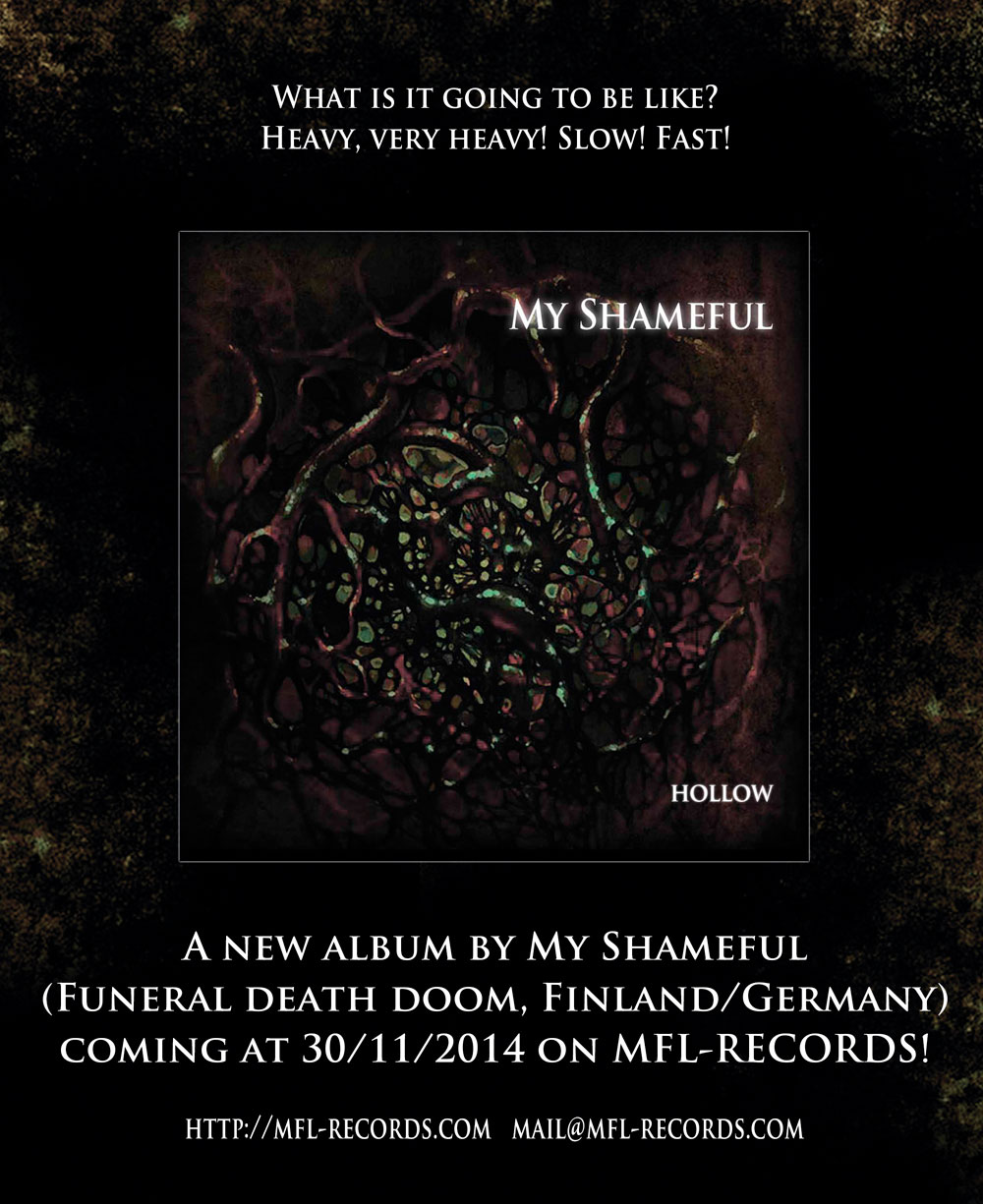 “There are no healthy and happy, there are non-examined and happily ignorant,” this is the ideology of Moscow death metal band DECAY OF REALITY founded in 2012 by M.Hater — guitars (Abstract Spirit) and E.S. — vocals (Who Dies In Siberian Slush, Forbidden Shape), well-known for their works with the avant-garde of Russian funeral/death doom stage. 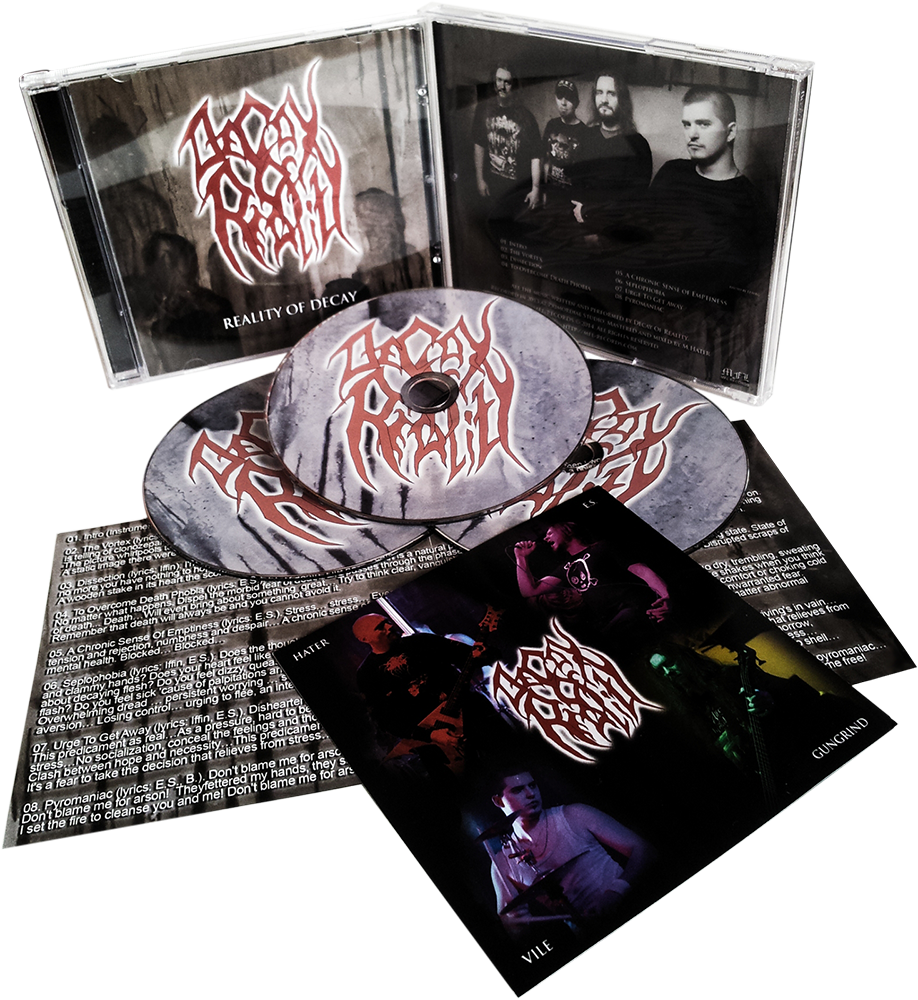 The prepared listener undoubtedly will appreciate the sound, drive and aggression of pure-blood death metal, combined with the sullen and depressive atmosphere of the best samples of funeral death doom. 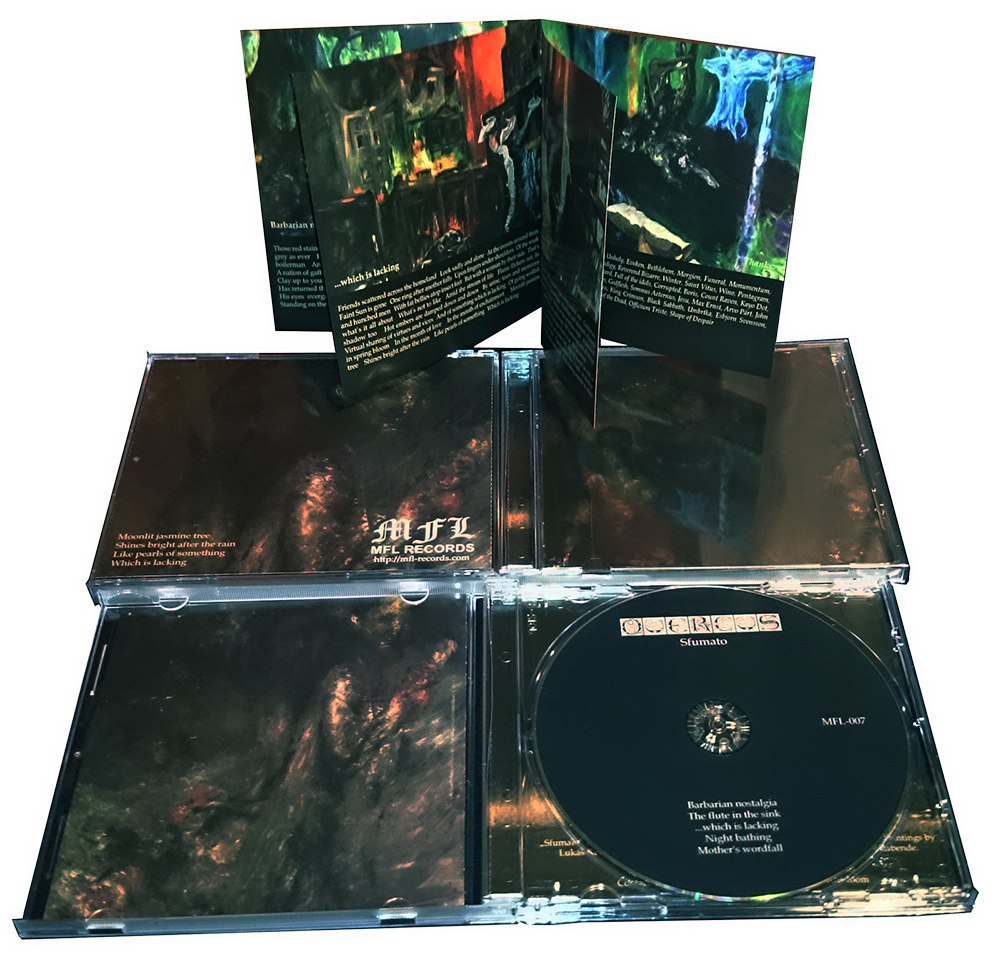 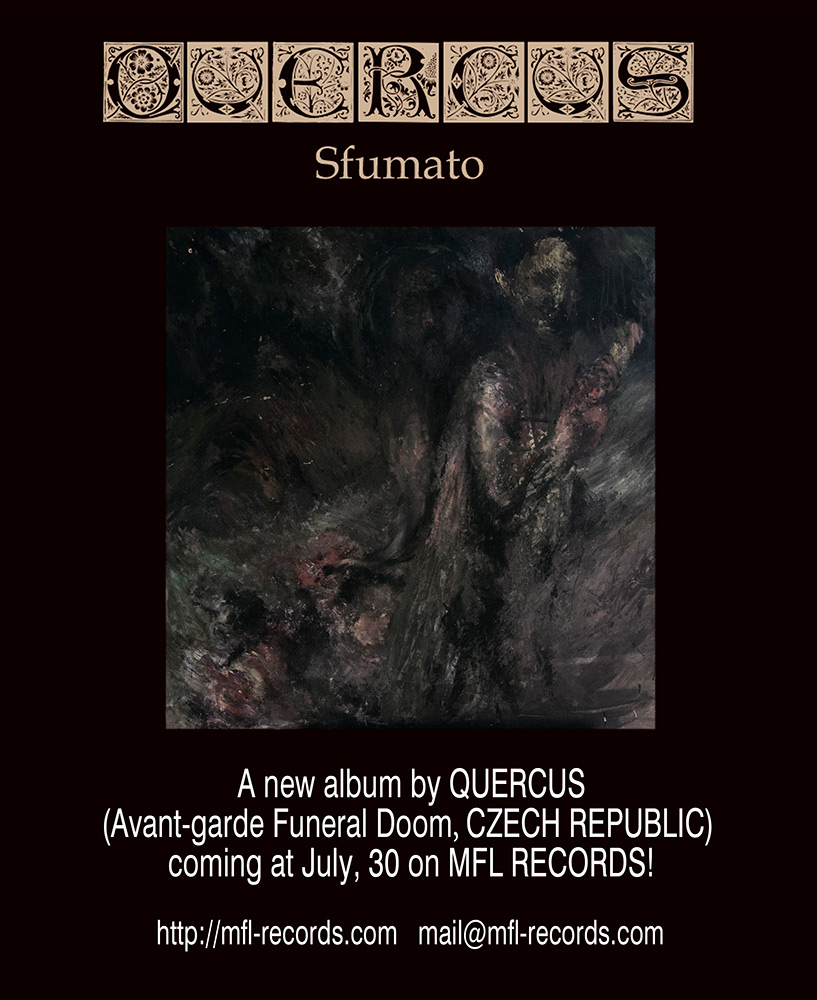 We have before us a joint conceptual work, which unites these bands in terms of views of life and death. According to musicians of Abstract Spirit and ENNUI, “Escapism” is a hopeless escape; the escape from everything… from yourself, from reality and disillusionment, escape from grim realities. 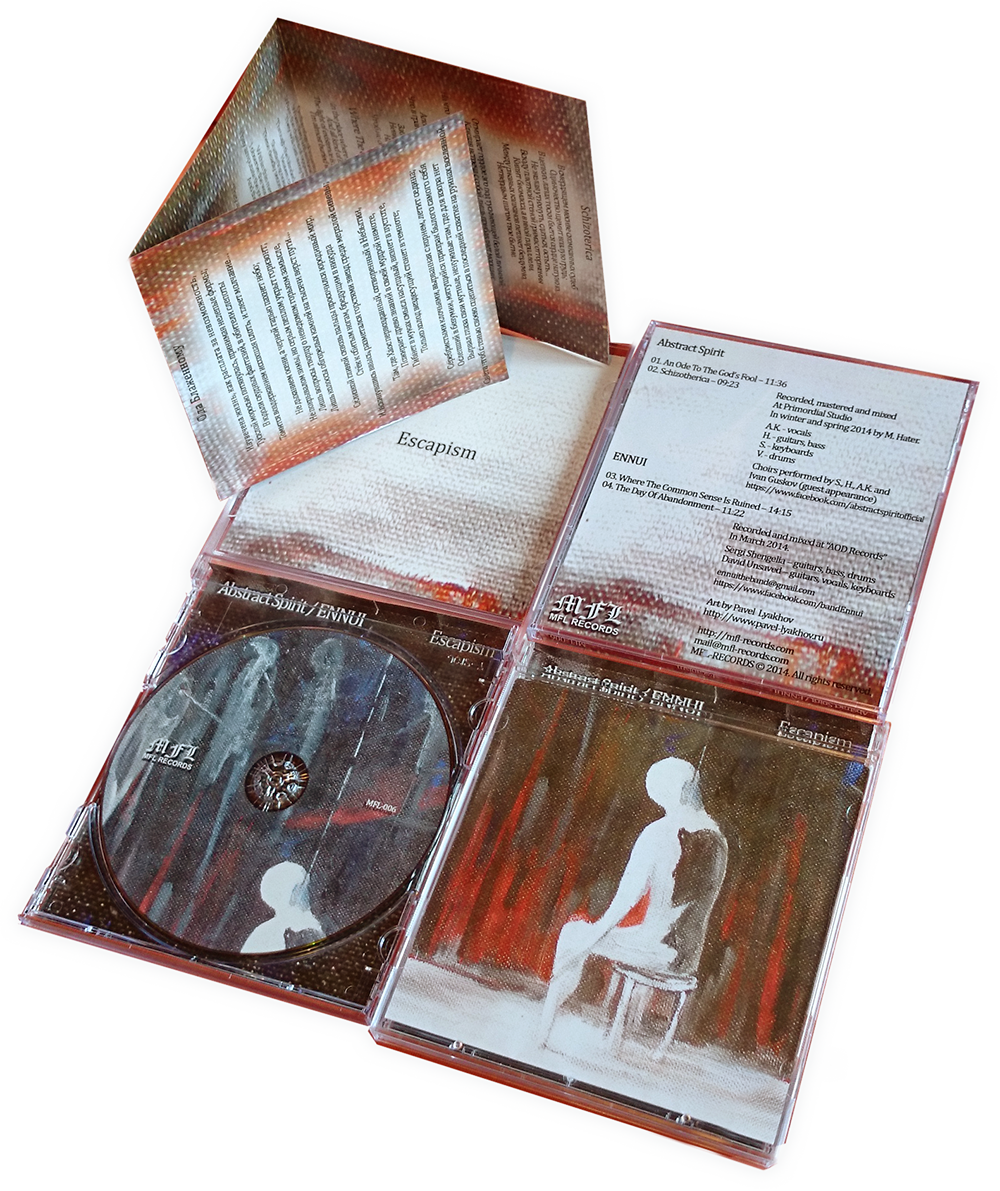 “Escapism” stands for a willingness to readily face the soothing death, to get rid of life torments, burdens of miseries and disappointment. Lyrics are written in three languages: Russian for Abstract Spirit; English and Georgian for ENNUI. Art work for the split was made on basis of a work by Moscow modern dark art artist Pavel Lyakhov, who is famous for his gift to visually reflect experience of relationships with outward things in a frightening manner, which can make you go dotty. From the view point of music, one should consider this record to be a comprehensive piece of music art. At the same time either of the two bands reflected their own vision of funeral doom from the own view point using individual scale. Connecting traits are the fundamentality and the thoroughness of the tracks themselves. What has this record in store for an experienced listener? A horrible side-show… the opportunity to walk in shoes of a person, who lacks brain parts in charge of happiness and joy. 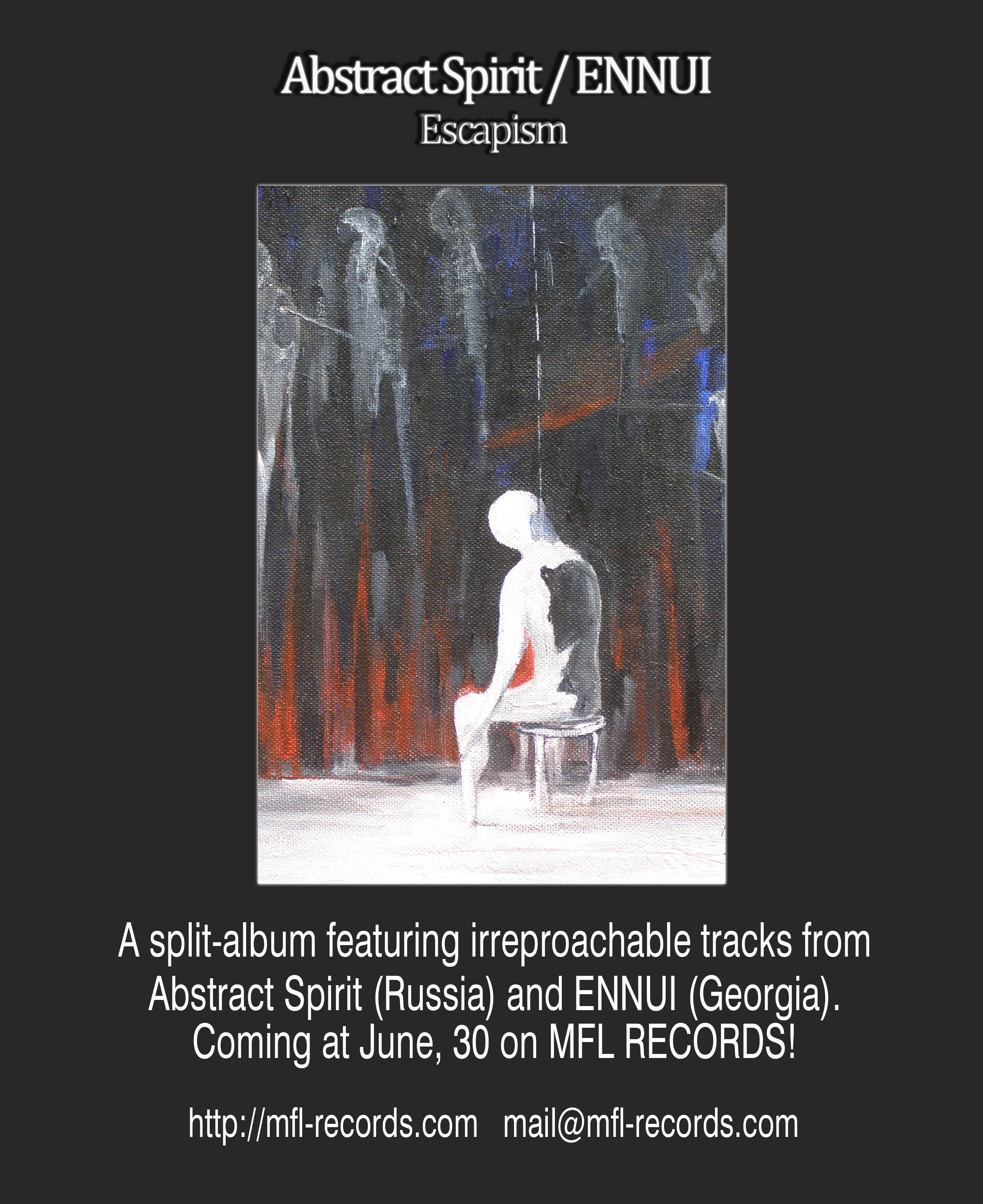 Death is unavoidable, it just hides under the burden of time… 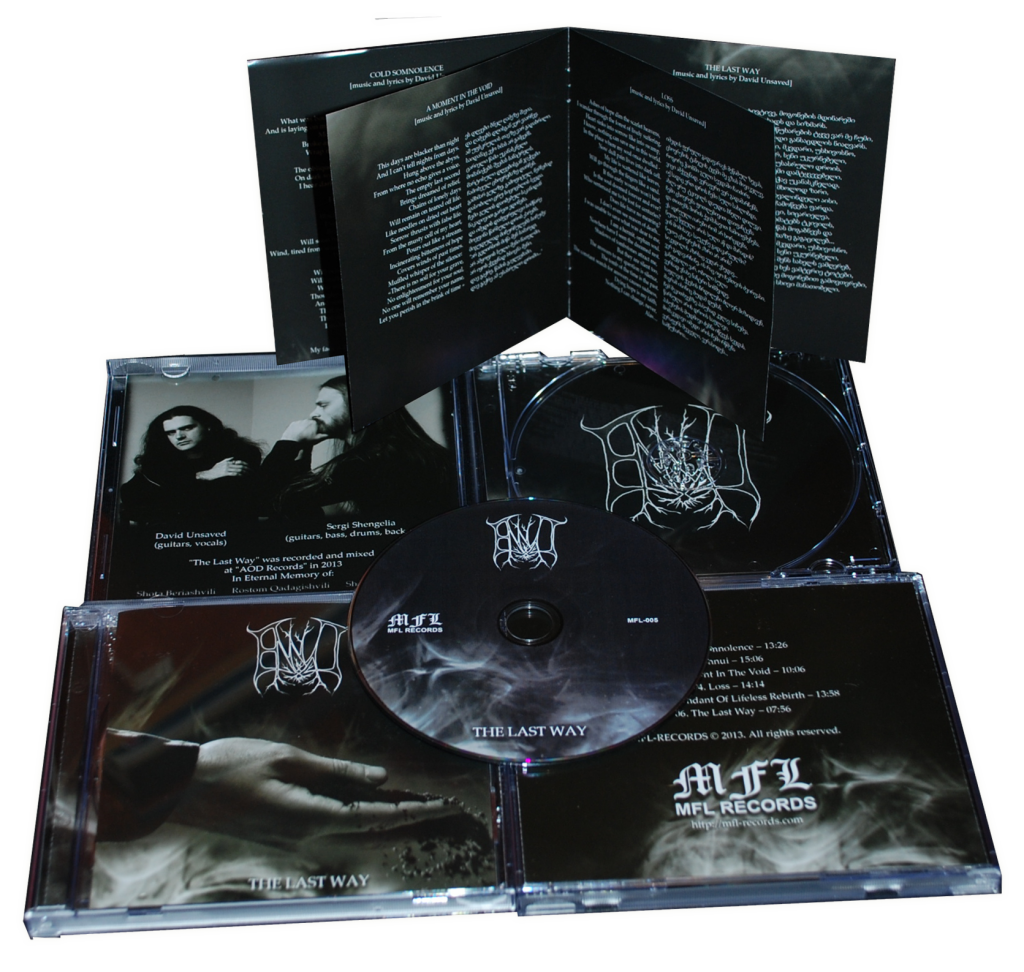 This album is a farewell to the last way, epitaph on a cold gravestone, carved in a form of music. Heavy aggressive riffs, beautiful guitar solos, new dark and monumental sound with complete absence of keyboards! New LP from ENNUI is better than the predecessor LP in terms of both compositional aspect and tragic atmosphere. Lyrics of each track – they are short stories of unhappiness and misery, of the most unpleasant events of a human life. In everyday life many of us forget about the unavoidable… To stop and think, understand, how fragile is a life and how unavoidable is a death, how horrifying is a loss – it is not a necessary to experience a tragedy… It’s enough to listen to the new album from ENNUI: «THE LAST WAY»… 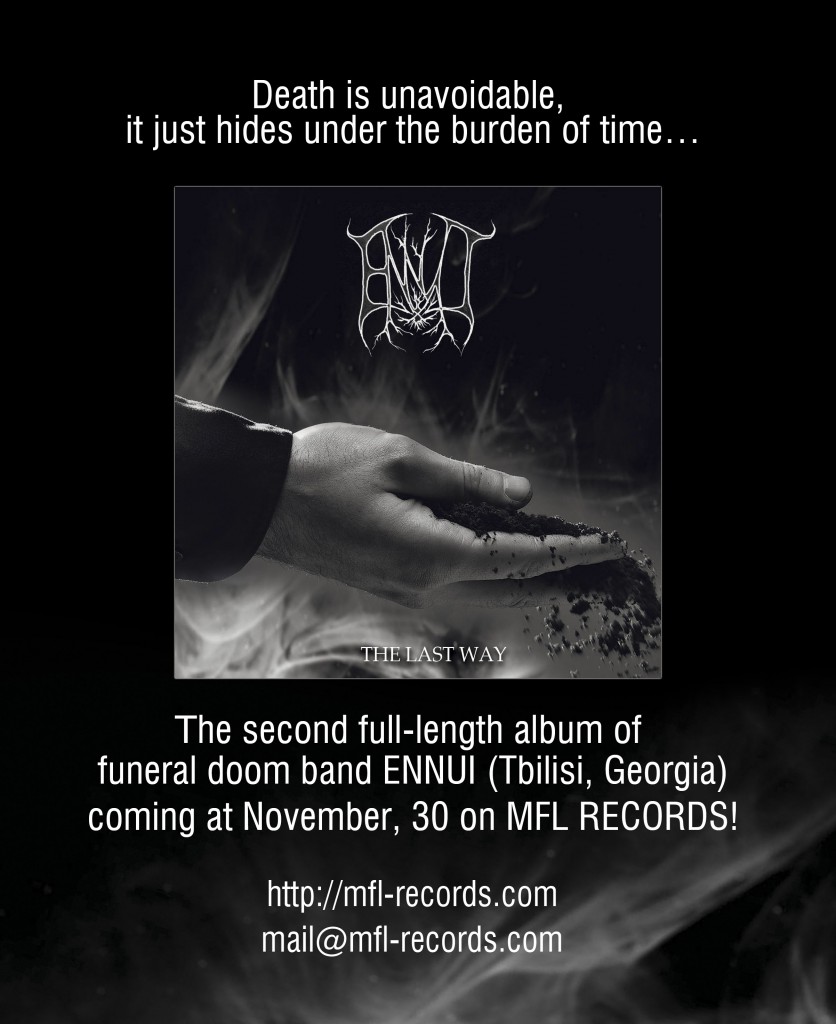 We are proud to announce a special edition of debute De Profvndis Clamati album “In Between Passionate Minnuendos” containing best Brazilian symphonic funeral-doom metal! This CD contains two exclusive never officially released songs as a bonus tracks. Basically the album sounds in vein of slow and mournful funeral/death doom metal with elements of symphonic and neo-classical music. The album comes as a limited edition digipack with 8-pages booklet.

Omnia morte cadunt mors ultima linia rerum.. «Everything ends with death, death — the ultimate limit of everything…» — this is the main idea of debut album of Georgian funeral doom band Ennui filled sorrow and solitude. Ennui — is an internal emptiness, apathy. In band’s songs it is a feeling of utter indifference to life which makes one spread arms to greet long-awaited death. 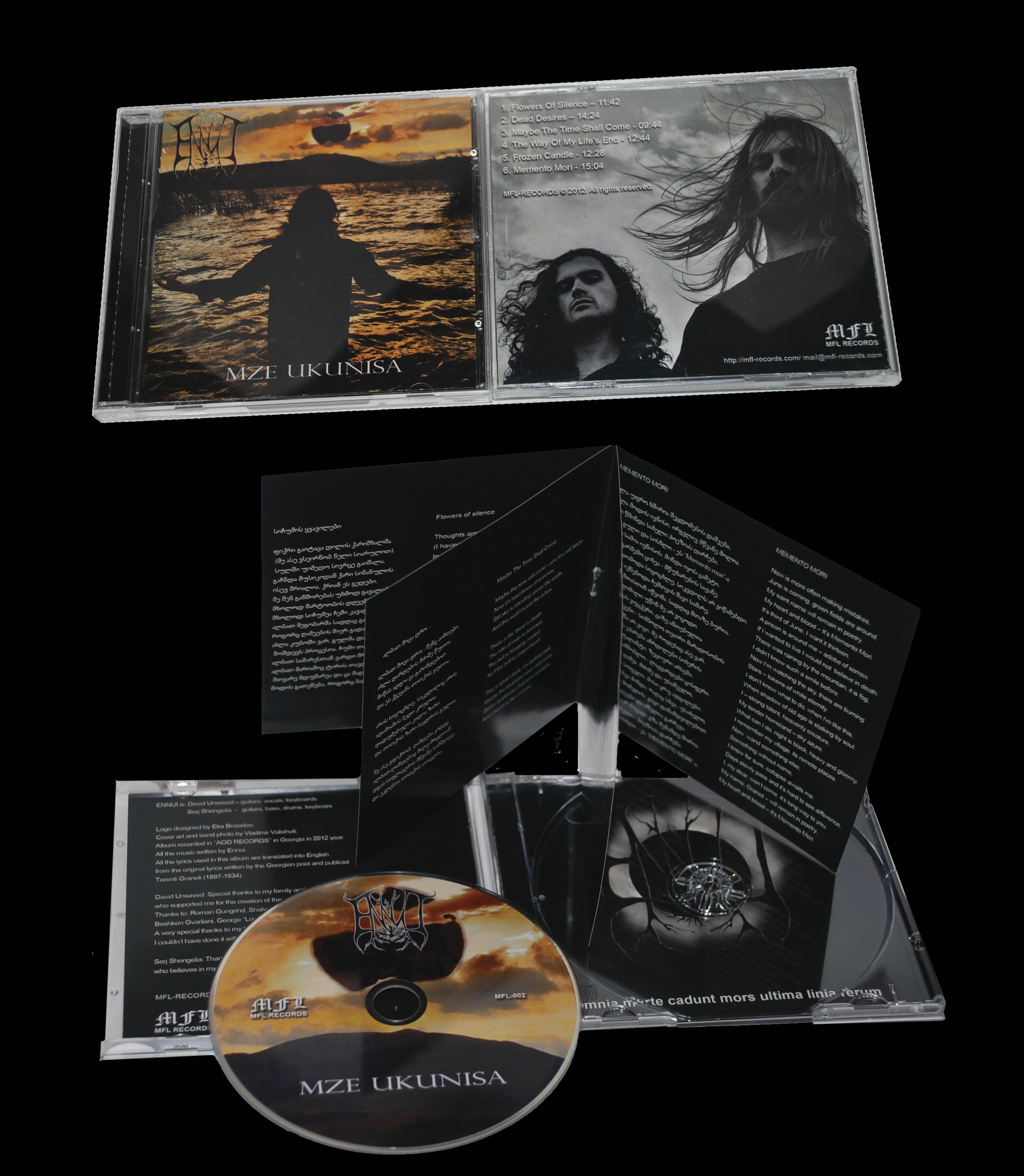 Album’s title «Mze Ukunisa» (მზე უკუნისა) meaning «Sun of the darkness» (mythological «dead sun») falling behind the horizon, light of the afterworld. This image is taken from national mythology where it represented the sad ending of life for ancient Georgians. In Ennui variant «Mze ukunisa» is the Black Sun, the darkness of the life which shines for souls entrapped in sorrow, long dead inside. Every one of six monolithic tracks is splendid combination of monumental riffs, epic keyboards, ethereal guitar solos and saturated guttural growling. All lyrics are in Georgian language based on poems of Georgian XX century classic — Terenti Graneli. Lyrical themes are: funeral ritual, getting rid off every feeling, departure to empty eternity, feeling of dying agony, pain, fear, insanity, despair, solitude, vicious circle…